I'm happy to announce the launch of new topic: Programmers Hall of Fame. The idea behind this is showing successful stories and sharing experience(if you like you can share too)! So if you want to be part of Programmers Hall Of Fame just send me a message, comment.

While most people are interested in programmer's salary in 2018 and programming language popularity we forgot about another side of programming - pleasure of creativity and satisfaction of completing difficult project. We are going to see some of the best programmers habits, motivation and passion.

Thanks to our first guest: Dibakar Saha for his achievements and courage. He demonstrate recently translator and calculator of human hand signs. Lets enjoy his trip together:

Tell us about yourself?

My name is Dibakar Saha aka EvilPort. I am from West Bengal, India. Presently, I am a student of Bachelor of Technology (B. Tech) in Computer Science and Engineering from Bengal College of Engineering and Technology which is affiliated to Maulana Abul Kalam University of Technology.
When I am free I spend my time learning new concepts in programming, making some new projects, playing video games, hanging out with friends etc.

Why did you decide to program/code?

I started coding because it was in my school curriculum. But I did not like coding much back then.

How long is your experience in programming?

I started coding when I was 10. I started with LOGO. Then I learned GW-BASIC. After that I learned C, C++, Java and Android. This happened within a span of like 5-6 years. Recently I learned Python. During my college years I learned a little bit of VB.Net, HTML, PHP, CSS etc. I like Intel 8085 a lot.

What is your philosophy on programming?

Programming is the only thing in the world that makes you think on HOW you think. In fact it makes you question on HOW TO think. So before getting in to any language, you need to get your thinking straight. If your thinking is straight and clear, then writing code is just a matter of learning the syntax.

Do you consider yourself a good programmer?

Are you a solo or team player?

I prefer being solo. But I have no problems in working with a good team.

What have you learned from mistakes?

That is a hard question. I mean, whatever I am today is because of my mistakes I made. But the biggest thing i learned from my mistakes is that never tackle a problem that you have not thought thoroughly. Improper planning can lead to disasters.

How has programming affected your life?

Programming to me is like a hobby. I code for fun. It is the one thing that helped me gain respect from my friends and family. My father is proud of what I am doing. I got fame that i could not even think about.
The biggest negative impact it made was that it turned into an addiction. I code for like 9-10 hrs straight without even thinking about food or even bathroom. This affects my sleep.

Can you share some best / funny memories in programming?

I created a program to control the cars in NFS MW 2013. So the idea was like this. If I tilt my phone forward, the car would accelerate. If i tilt my phone backward, the car would move in reverse and so on. On successful completion of this project, I had a feeling that my phone was like the PS4 controller. I had such a great feeling about it that I cannot express it in words. Check it out the early version here NFS 2013 Wireless Controller 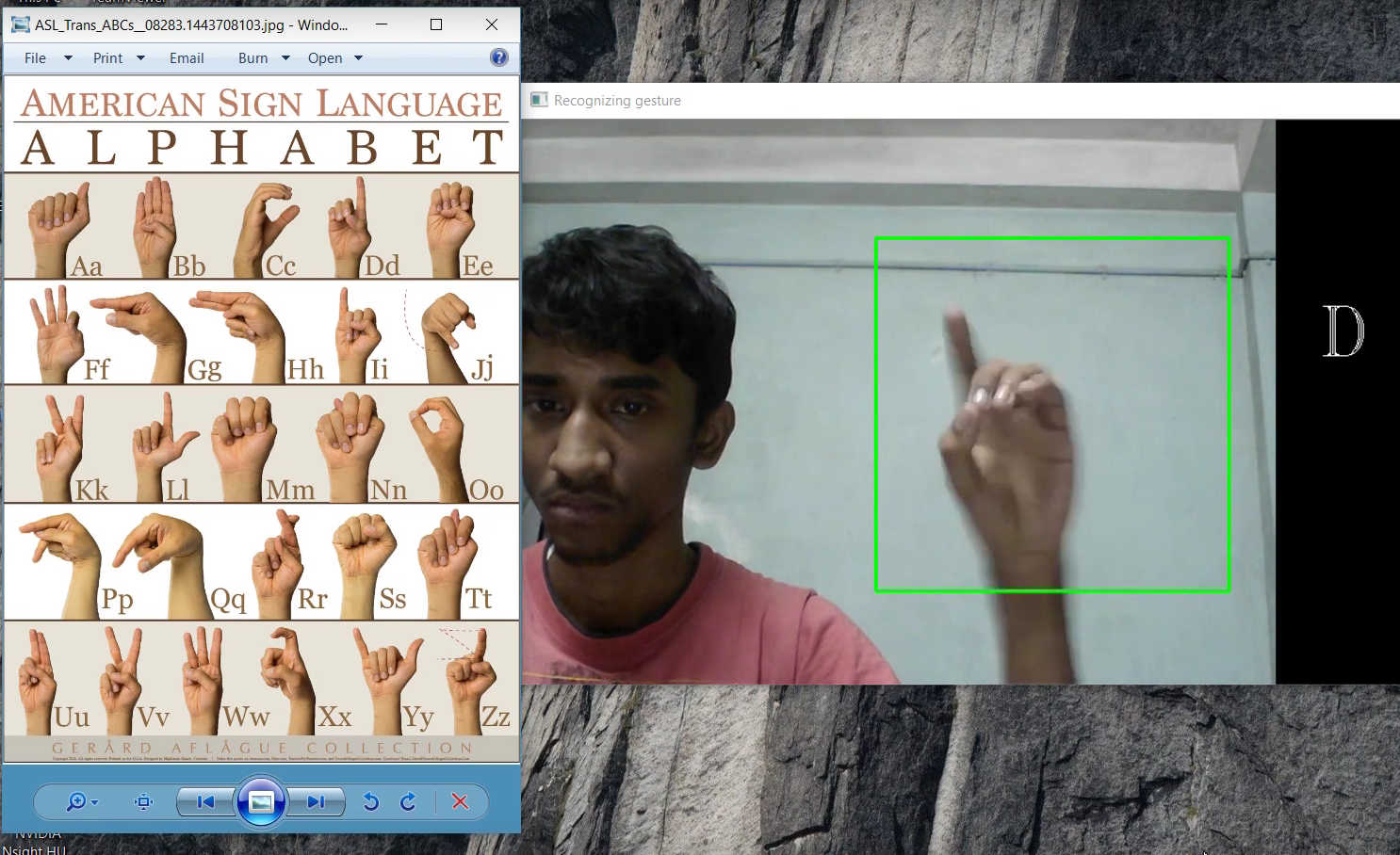 Questions about the translator and the calculator of sign language / ASL

Recently you show a sign recognition program - The ASL translator and the calculator.

How the idea was born?

The calculator's idea actually came from Adrian Rosebrock's website pyimagesearch.com. On seeing the demo, I thought if i could do it myself. I did not see the code but i still managed to do it.
When shared my version of it on facebook, people thought that I had made a program that could help the differently abled people. So, I gave it a serious thought and learned some basics of neural networks and created the ASL translator.

What is your hardware configuration?

Is it easy to be programmer in your country? Especially working in area as machine learning?

Computer Science was in my school curriculum. So that made it easy for me to learn programming.
In India, if you are a python developer who is a fresher, then getting a job is pretty hard. But if you are experienced, you will have an awesome job. That is what I know. Perhaps the market has changed now.

How long did you work on this project?

What is your advice for people who starts now in programming / machine learning?

Are these the only resources that you used? - Tensorflow's official website and machinelearningmastery.net.

for this project i used only these resources. I read some books and pdfs for understanding neural networks.

You have good documentation on this project. Where did you learn how to do it?

I really did not learn anything about documentation. I just wondered, if a beginner was to use my project who had a fair amount of idea about neural nets as i do, then how would he/she use this project. With that thought I wrote the documentation. And yes, it is not much newbie friendly as neural networks and image processing are used to accomplish this project. But I hope if they read the documentation clearly then they should be able to run it.